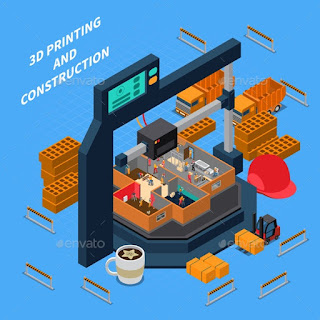 3D printing in Construction remains a unique & rather new approach to an industry characterized & influenced by traditional approaches. A few examples of 3D printed houses & offices do exist, but 3D Construction is a long way from being the default technique of constructing houses or structures.
3D construction of a structure, whether a house or any other building, is achieved using a 3D printer attached to an arm used to build a project onsite. 3D printers may also print or pre-fabricate parts of a building in a factory which can then be put together later at the construction site. 3D printers used in construction are unlike other 3D printers, as they require materials that dry/cool rather quickly, forming the intended structure.
3D printing can help the Construction embrace the ‘lean’ concept of manufacturing. A good amount of waste is generated at construction sites, often because excess material is ordered. This makes construction ineffective & expensive as a process. 3D printers on the other hand only use materials required to print the structure, drastically reducing cost & generating zero waste.
3D printers can work 24x7, meaning a colossal reduction in time required to construct buildings. This can also result in a reduction of costs generated by avoiding the need for low-skilled labour.
3D printers are known for their ability to print unusual shapes & objects. The same applies to construction where buildings with unique architecture can be 3D printed, something traditional methods may find challenging.
Although the idea of 3D printing houses or buildings sounds appealing, the technology is still at a nascent stage in the industry & wide-scale adoption remains mired with several hurdles. Building firms operate on a thin profit margin. The huge amount of investment needed for 3D printing houses presents an enormous barrier to the adoption of 3D building designs.
Cultural attachment to traditional construction methods also remains a barrier to the adoption of 3D construction. The majority of people conceive traditionally built houses & construction methods as more reliable than 3D construction, presenting a challenge for building firms from a sales point of view.
3D Construction also raises the issue of compatibility with various construction techniques. Although some houses & types of buildings have been successfully constructed using 3D printers, building designs with various architectural components may not be easily achieved. Factors like plumbing, insulation, electrical fittings, and security of the inhabitants remain as challenges that 3D Construction must overcome.
3D printing in construction has certainly arrived on the scene. Wider adoption of the technology however, remains something that can only be achieved with advances in materials & further R&D in 3D printing itself.
Posted by 3ideaTechnology at 23:57